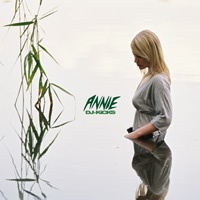 In this day and age it doesn’t seem to matter that pop stars don’t give two hoots about the music that they sing. Granted, our perma-tanned, vacuous performing mannequins – male and female – might be able to wax lyrical about their latest designer frock or which bar in town helps them to maintain their celebrity status. But quiz them about their musical choices – ostensibly their chosen career lest we forget – and apart from a few perfunctory – that is, pre-chosen by their stylists – nods towards Madonna, Kylie and, if they want to be slightly controversial, the Scissor Sisters (‘They’re just like, so much fun’) and Pharell Williams, you soon start to draw a predictable blank. Praise be then for ultra hip Norwegian popster Anne Lilia Berge-Strand, although you might know her better as Annie. Blonde, sexy and possessed of a devilishly cute Scandinavian demeanour, she’s as pop as Kylie and co, make no mistake.

However, whereas it’s doubtful you’d want to spend a night back at Rachel Stevens’ delightfully decorated pad rifling through her record collection, the same cannot be said of Annie. Although most blokes like to regard the fairer sex as not possessing the requisite amount of passion or knowledge to analyse the latest Daft Punk opus, Annie is equally adept at discussing the merits of Arthur Russell, as she is enthusing about a pair of Jimmy Choo’s.

The fact that she’s got a terrific record collection to boot is just another reason to admire her. How do we know? Well, in the wake of the interest cultivated in her by her turn-of-the-century instant cult classic, ‘The Greatest Hit’, Annie began to take to the ones and twos. With a friend she started the appropriately named Pop Till You Drop club in Bergen, and though she “never had any ambition to be a DJ” her resolute party spirit ensured that the bookings kept coming in.

“Technically I suck,” she candidly admits, “for me, the most important thing is to build it up and make it a good evening.” It’s this pretension-free ethos that has enabled Annie to compile her first, highly prized, DJ Kicks mix. Much like her compelling debut album ‘Anniemal’, which contains the aforementioned ‘Greatest Hit’ as well as the burning dancefloor sensations ‘Chewing Gum’ and ‘Heartbeat’, her mix is a dynamic and exuberant melding of literate electronic pop and raunchy electro disco. It’s charm lies not in any seamless (yawn) mixing or that it takes you on an epic musical journey (likewise), because both of these characteristics are notably absent. Rather, Annie makes a virtue of her lo-fi deck prowess. The emphasis is on the music: her mix and her reputation lives and dies by the quality of the tunes contained therein. To this end, she’s graduated with first class honours. Aided by her musical companion Timo, he of electronic iconoclasts OP:L Bastards, her 17 tracks veer from demonstratively curious oddball electro (La Bionda’s ‘I Wanna Be Your Lover’) to propulsive misfit rock (Death From Above 1979’s ‘Black History Month’) by way of theatrical funk (Mu’s ‘Paris Hilton’) and expansive and emotive house-cum-techno (Brundtland And Therson’s ‘Geared Up’).

As Annie herself states: “It’s a vivid selection of music, a mixture of the old and new, which takes in electronica, techno, rock’n’roll and electro.” It’s also very now. Not in any studious or slavish manner – there’s certainly no modish pretence involved – but in the way it joins together seemingly disparate styles, rendering them joyously cohesive.

In this way, Alan (Suicide) Vega’s sneering white hot ‘Jukebox Babe’ – think Elvis fronting Funkadelic after a night out at CBGB’s – becomes the ideal companion piece to the muscular vibrancy of Zongamin’s neo-electro smash ‘Bongo Song’, in much the same way that the uplifting and emotive strains of the seminal, Paradise Garage-friendly ‘Lady Bug’ by Bumblebee Unlimited can sit next to the old school booty bass licks of Sally ‘That Girl’ by Gucci Crew II.

And that’s without mentioning the two exemplary contributions by Annie herself. The first, ‘Wedding’, a collaboration with Röyksopp, sees Annie’s digital disco collide spectacularly with synthetic soul, her breathy and suggestive ‘I do, I do, I do’ refrains enough to make even the most confirmed homosexual man go a little funny. ‘Gimme Your Money’ (a venture with Timo), meanwhile, is wonky new wave pop, blissfully evocative of Trevor Horn’s best ZTT work.

Annie says the key to her DJing is emptying the dancefloor and then filling it right back up again. Well, we’re sorry, but we’re going to have to disappoint the young lady on this score. It’s difficult to envisage a time when the dancefloor would part, Moses-like, when this galvanising and intuitive mix is on the stereo.
Born of a music lover’s wish to share the wealth, Annie’s DJ Kicks album sparkles with an illuminating and contagious passion. And that, no matter what occurs in the upper reaches of the charts, will never go out of fashion.