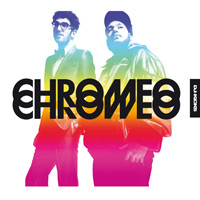 True to the series’ standard, Chromeo’s selection takes in sounds you’d be hard-pressed to hear almost anywhere else: early ’80s disco and R&B that sound little like the Italo and space disco currently enjoying a rise in hipster cred. Bursting with robo-funk basslines and plastic handclaps, swollen with strings and keyboards and vocals, it celebrates an oft-derided side of ’80s pop. Amidst gems from the likes of Leo Sayer, France Joli and even The Alan Parsons Project, the mix also features new tracks from current artists like Lifelike and Chateau Marmont—not to mention Chromeo’s own cover of the Eagles’ “I Can’t Tell You Why.”

And why not? Chromeo have never been afraid of looking uncool. Dave 1 and P-Thugg got over that when they quit making hip-hop beats and gave into their love of obscure, electro-infused funk, disco and R&B, trading sampled drum breaks for lean 808 patterns slathered with vocal effects and sticky-sweet keyboards. The approach got them signed to Turbo (then Vice and V2) and has given the world singles like “Needy Girl” and “Fancy Footwork,” as well as two albums and a passel of remixes by artists like Etienne de Crecy, The Juan Maclean and Playgroup (aka Trevor Jackson, who is actually responsible for this release’s artwork.) Their DJ-KiCKS mix goes to the heart of the Chromeo story.

“We’ve been buying vintage records since our teens,” says Dave 1. “That’s what fueled our inspiration when we started doing Chromeo,” attempting to recreate the sound of early ’80s records they hadn’t found ways to sample, as hip-hop producers. “Usually, for DJ mixes, we dig up records and do a little selection of the cream of the crop of super unknown records,” chimes in P-Thugg. “For this one we just wanted to put on funk that we like and that’s it.”

“I doubt there are many records on the mix that are worth more than a dollar apiece,” says Dave 1. The crucial difference is that these are “obscure dollar bin records,” plentifully available yet all but forgotten, even in their native Quebec. Appropriately, given Montreal’s rich history as a disco hotspot, there’s a French Canadian theme woven loosely into the mix, taking in tracks from Pierre Perpall (aka Purple Flash), France Joli, Diane Tell, Cheri and the one-hit wonders Soupir. Some of the songs were in rotation on the adult-contemporary radio stations the musicians grew up listening to, says P-Thugg, “and now, 15 or 20 years later, we’re finding our way back to that.”

In addition to Quebec’s finest well-aged cheese, there are also selections from Italo legend Kano, Floridian funkstress Donna Allen and the little-known Carmen, whose “Time to Move” is an infectious and all-but-unheralded track recorded when she was only 16. Even Rick James makes a proxy appearance, in the form of his protégé Val Young.

“When we started Chromeo, people thought we were maybe being ironic,” says Dave 1. “But it goes deeper than Rick James,” he insists, recalling the critics who were eager to cast Chromeo as Vice’s answer to “I’m Rick James, bitch!” “We listen to unknown guys from the ’80s who tried to copy Rick James! It’s a very scholarly approach. We do these mixes to show our erudition.” But with heavy hooks and heartfelt songs like these, their “scholarship” is the opposite of egg-headed.

Just listen to their version of “I Can’t Tell You Why,” which recasts the soft-rock staple in drum machines, synths and talk box. “What’s weird is that if you listen to the original record, they’re trying to sound like Al Green,” explains Dave 1. P-Thugg goes even further: “It’s a slow song, a great song, super soulful. We knew the song, but when you cover it and try to go deeper and listen to everything happening, you discover so many little things in there.” Those earnest declarations don’t sound the least bit tongue in cheek, and neither does the end result. In fact, the overriding vibe of Chromeo’s DJ-KiCKS might be described as innocent. Mixed in with its glossy synthesizers and belted soul vocals, its one-hit wonders and outmoded drum machines, there’s a sense of sheer delight. Simply put, Chromeo really just want to big up a side of popular music that deserves way more credit.

“Of course, man!” explains P-Thugg. “It’s the same as when we started with ’80s funk music. It’s not ironic. It’s not a joke. It’s really sincere! Guys like Prince, they really had it in their heart. He feels it! Same with the Doobie Brothers’ ‘What a Fool Believes,’ this is a real song! It’s sincere music, and that’s what the best music is. It’s non-calculated.”

Just like the mix, which is calculated only to make you move, maybe to swoon a little; it’ll definitely change the way you think about ’80s pop. Count on Chromeo to pull all that off with ease.