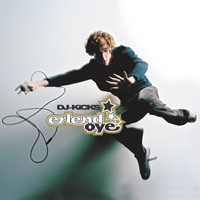 Getting straight to the point: the job title DJ isn’t exactly the first thing that comes to mind when thinking of the name Erlend Øye. The singer, songwriter and indie pop star has only owned a double deck for a few months (evidence of this can be seen on the second page of the booklet to his solo album “Unrest”) and much prefers playing CDs anyway. Despite all this, Erlend Øye the DJ is anything but a joke. With his compilation for the latest installment of the DJ-Kicks series, the Berlin-residing Norwegian not only redefines the DJ mix, but also unknowingly uses !K7 classics to do it:  you don’t have to be the technically gifted record spinner to come up with an exciting mix. And, in a certain way, he also brings to mind DJ-Kicks highlights like Kruder & Dorfmeister: but where these guys enriched their mixes in the studio using dub effects, keyboard overlays and other distortions, Erlend Øye takes to the microphone.

Erlend Øye has re-sung nine songs for his DJ-Kicks album. Three of these are so far unreleased compositions of his own (“Intergalactic Autobahn”, “The Black Keys Work” and “A Place In My Heart”) and the other six are cover versions. Øye also interprets these in such a way that the penny often only drops for the listener after the first or second verse. And when Erlend sings hits such as “Venus” and “Always On My Mind” with his enchantingly soft voice, it’s not clear whether he’s covering Bananarama or Shocking Blue, the Pet Shop Boys or Elvis. Erlend Øye generally sings his versions a cappella over pre-existing instrumental tracks and it wouldn’t be too surprising if some of these mash-ups even became club hits. Highpoints include the mix of Justus Köhncke’s “2 After 909” with Erlend’s “Intergalatic Autobahn”, and Silikon Soul’s instrumental mix of Röyksopp’s hit “Poor Leno” (on the original of which Erlend’s voice can be heard) with “There Is A Light That Never Goes Out”.

The idea of combining this Smiths classic with the Röyksopp remix came to Erlend two years ago when the Röyksopp CD was released and he heard Schneider TM’s version of the Smiths song. The genesis of this approach wasn’t so much the burning bootleg fever of the time but Erlend Oye’s entrance into electronic music. “Until the end of the 90s, I wasn’t really interested in electronic music at all”, says Øye. “I first came into contact with it when my friend Erot played me a track he’d produced for the Swedish house label Svek. I thought it was magnificent and I wrote some lyrics to go with it. Subsequently, we re-recorded the piece with my vocals. For me as a singer, it’s no big difference whether I sing to a piece especially produced for me or an already existing techno or house track.” That was four years ago. In the ensuing period, the celebrated Kings of Convenience debut, “Quiet Is The New Loud” was released, the acoustic project made world famous by Erlend and his partner Eirik Glambeck. Then there was the Remix collection, “Versus”, which also included Erlend’s song with Erot under the title, “Gold For The Price Of Silver”. Erlend Øye’s debut solo album, “Unrest”, subsequently brought him together with electronic producers like Morgan Geist, Schneider TM and Prefuse 73 at the start of last year.

Erlend Øye’s selection for his DJ-Kicks mix is a mixture of tracks by these producers (Morgan Geist is there, as are Minizza and Jolly Music) as well as a striking number of a tracks from the Cologne label Kompakt and its genre (Jürgen Paape, Justus Köhncke, Jackmate and Ada). All tracks that Erlend Øye first encountered in Berlin clubs. “I always dance when I go out. And when I particularly like a track I’m dancing to I have to know what it is. So I go to the DJ and ask him.” says Erlend. He picked up one or two mixing techniques in the same way. “DJs often mix in a few bars of the track coming next. I do the same thing, but I don’t announce the track by playing it. I sing a verse of it.” On the DJ-Kicks CD, this technique can be heard in the fabulous transition from Cornelius’s “Drop” to Phoenix’s “If I Ever Feel Better”. There’s more of it to come in one of the clubs where Erlend Øye is stopping off in the coming months on his DJ-Kicks tour.