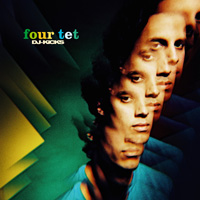 For a man known primarily for his home made excursions to the far reaches of the musical map, Kieran Hebden as a DJ is a different kind of trip, the gratifying results of which can be seen all over this exemplary DJ Kicks compilation
(the 26th in this now legendary series).

“I’ve done previous compilations based around music that’s been influential to me, just picking a bunch of records that I like. This time I wanted to make something that was more upbeat, stuff I might play out in a club and that draws from my recent experience as a DJ,” he says. Inspired by his 8 hours sets at The End and in Ibiza with Timo Maas, Kieran says he has rediscovered the thrill of filling a floor: “Playing for people who just want to dance is an exciting thing for someone who´s into experimental music.”

As you might expect with Four Tet, however, nothing is ever that straight-forward, and his DJ Kicks is a mind blowing experience, taking in just about as many genres as there are tracks (which is 20).  Old skool hip-hop, French prog, conscious soul, electronic experimentation, minimal techno, early two-step, cosmic jazz, African thumb pianos and much more besides share space here, bound together by analogue synth interludes, segues and an exclusive new Four Tet track specially created for this compilation. “I tried to come up with interesting ways of getting from one track to another,” says Kieran, alluding to the sometimes head-cleansing pure tones that allow him to pass between seemingly incongruous musical states. “I asked myself what I can do that’s different and sits apart from other DJ compilations?” the answer is apparently – everything.

Four Tet’s DJ Kicks begins with David Behrman’s ‘Leap-day Night (Scene 1)’, music introduced to Kieran by Stereolab’s Tim Gane and labelled here “a scene setter”. A chilly-yet-gorgeous piece of wowing, fluttering and randomly shifting ancient electronica, it dusts off the palate quite beautifully.
This leads into Syclops ‘Mom, The Video Broke’, one of several tracks here that, despite the opening quote, manage to be both thematically upbeat and drawn from a bunch of records Kieran happens to like.  This he’s being playing out a lot of late, alongside the squelchy and off-kilter techno of Model 500’s ‘Psychosomatic’, which crops up later; the messed up, cut-up house of Akufen, and the “early 90’s major label hip-hop” of Showbiz and AG’s ‘Represent’ and Group Home’s ‘Up Against the Wall’.
“I found it a really inspiring time in hip-hop,” says Kieran. “’Represent’ is crazy lo-fi, with a frantic raw guitar loop.  There were so many consistently incredible records from that time beyond mere James Brown sampling.”

From England of about the same time comes Kieran’s closer, ‘Autechre’s ‘Flutter’, which he sees as an exemplar of what you can do if you set your mind to it. ’Flutter’ was made in protest to the Criminal Justice bill. The beats never repeat, so, in theory, you could play it at a rave without contravening the repetitive beats legislation.  You don’t see people making records with such bold and important agendas anymore and I really miss it.”
“I get very excited when people make a very experimental record and expect to change the world with it.  Of course, ‘Flutter’ is also an incredibly beautiful and melodically amazing piece of music, which is why I put it last.”
Just over from Autechre find ‘Dilemma’ and the spare two-step of the debut from So Solid Crew, local Wandsworth lads who bedazzled the young Kieran with their fearless experimentation.  “It is claimed this tune was created on a Sony Playstation, and whether it was or not, I love the fact that a record can be so experimental and so commercial at the same time.”
“In the same way as finding an obscure record no-one knows about, finding an unlikely record that fits has just as much appeal for me.  All my favourite DJs have a knack of dropping the most bizarre things into the middle of their set.”
In this spirit we find the pure soul genius of Curtis Mayfield’s ‘If Only I Were A Child Again’. “Curtis always sounds good,” reckons Kieran, especially bursting into an otherwise techno set…

Meanwhile, in the “obscure records” corner we find Heiner Stadler, a jazz arranger doing an electric-period-Miles funk thing with muted trumpets and skittering rhythms; Heldon, mid-70s French prog rockers just shading out the Human League with their electronic wizardry and pre-emptive strike on post-punk; uncredited “genius disco pioneer” (think ESG and Liquid Liquid) Gary Davis; and Julian Priester and Pepe Mtoto’s ‘Love, Love’, a cosmic jazz classic taken from a spin-off project from the incredible pool of musicians surrounding Herbie Hancock in the early 70s. Julian Priester played trombone with Hancock and Sun Ra, a the full 20-minute version of the tune will be found on the vinyl edition of this DJ Kicks. Cosmic, perhaps, in a 21st century way are Brooklyn’s Animal Collective, who’ve toured extensively with Kieran and who he holds in the highest regard.  “I love their constant development,” he says. “They never slow down and are always playing new stuff and pushing ahead.” Pushing ahead 30 years ago were Gong, about whom you don’t here so much these days. “Madlib played this and I checked it, and sure enough it’s totally fantastic,” says Kieran.
“It’s another way of working weird bits and pieces into a DJ set.”  This also explains Shona People of Africa, a recording of a thumb piano ensemble from the legendary Nonsuch Explorer series. Madlib crops up himself with his remix of Madvillain’s ‘Figaro’, which pulls together groundbreaking contemporary hip-hop with an infectious world music sample in a unique and effortless tour de force.

Finally, in a drawer of their own in Kieran’s sentimental education locker we find Quickspace Supersport, whose ‘Superplus’ is included here in tribute to the fact that they were one of a handful of bands who made a teenage Kieran want to make music in the first place, as he went to see them play around town at every available opportunity.  Thanks Quickspace, if only you’d known what you were starting…