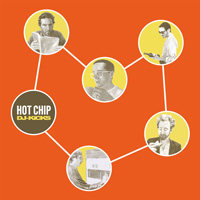 A question: How does one adequately capture the madcap brilliance of Hot Chip, arguably the most inventive band operating in the UK today? You could start with talking about their playful, wayward pop? Which is a pretty good start, but then that would ignore their excursions into skewed hip hop and sun-dappled folk. And how can we forget their fondness for mad, slow techno?

Over the last couple of years, as their star has risen ever upwards, they’ve been described in various quarters as a bedroom Neptunes; a ghetto Kraftwerk; airy-fairy art pop; Aphex Twin writing for Will Young and the Incredible String Band producing Rachel Stevens.
All of these are descriptions that go some way to encapsulating their unique sound but the real magic is putting your own spin on their devilishly slippery tales.

Since they first lodged themselves in the public’s consciousness in 2003 with the magnetic Down With Prince EP (released on the ace Moshi Moshi imprint) half the fun has been in trying to guess what this London quintet will do next. Their first album, Coming On Strong (2004), did just that, but their second album, the Mercury nominated The Warning (2006), took their sonic tonics to another level.
So what happens when they transpose their musical tastes into the realms of the DJ? In the hands of lesser talents such an eclectic mixture of sounds, textures and grooves could end up a bit of a mess. Mercifully, as they demonstrated on The Warning, Hot Chip have an uncanny knack of taking all manner of cultural flotsam and jetsam and shaping it into something incredible.

And so it is with their first contribution to the Don of all DJ mix projects, !K7’s evergreen DJ Kicks series. A sublime journey through the dusty crevices of Hot Chip’s 10-legged record collection it manages to take in wonky electro-pop, Detroit techno, Balearica, off-kilter house, hip hop, mellifluous drum’n’bass, R’n’B, blues, jazz and Joe Jackson without ever sounding contrived or hackneyed. In fact it’s the soundtrack to the best house party you’ve never been to. Or something like that.

“It’s random,” admits Hot Chip drummer Felix Martin, “but we arrived at the track listing in a democratic fashion, and I have to say, that I think it’s representative of the different influences that make up the band.”
That means the nods to the dancefloor arrive courtesy of regular DJ Felix (“That’s where I’m coming from,” he admits), while frontman Alexis, who’s also partial to a bit of deck manipulation, provides the quirkier side of the 24 track shindig.

“We’re DJs at the opposite end of the spectrum,” Felix explains. “When Alexis plays out you’re likely to hear Harold Faltermeyer’s Fletch soundtrack, some Brian Eno and then some hip hop. I like house and techno. It makes for quite a schizo mix, but that’s the way we are as a group.”

With this in mind, the thrills and spills that make up this 68-minute journey (not that kind of DJ journey, thankfully) make perfectly disjointed sense. The hypnotic, jerky soul of opener Nitemoves by former Hot Chip sticksman Rob Smoughton, under his Grosvenor nom de guerre, gets things going and this is followed by the luminous old school hip hop of Positive K’s I Got A Man and the rhythmical electro rabble rousing of Gramme’s Like U.

Kindred spirits New Order keep things perky with Bizarre Love Triangle, while the boisterous blues of Etta James’ Down In The Basement is a suitably titled homage to that place below ground where all manner of fun occurs. Hot Chip’s exclusive cut, My Piano, is another sure-fire winner. A piano-led, soon-to-be Balearic gem, it evokes not only the aforementioned New Order, but the perfect pop of the Pet Shop Boys. No mean feat.

But what really gives the mix character is the pleasing use of unknown, or, at least, unheralded artists. The decelerated daft R’n’B of Um’s The Man’s Got Me Beat and the blissful micro house of Lanark’s The Stone That The Builder Rejected are both superb discoveries.

And here, the hand of Hot Chip is very much at work. Um is a friend of the band’s from Cambridge (“He’s been labouring away in relative obscurity,” says Felix, “but he’s a maverick musician; a real influence on us. It’s nice for us to be able to put tracks like his and Grosvenor’s on this album”), while Lanark is actually Felix and Al Doyle from the band.

“We’ve tried to make it flow,” says Felix, “but it’s good when bits jolt you. It’s not a background, chill-out mix at all. We tried not to think too hard about the bigger picture, but concentrated on something that sounded good in the moment.”

One listen to this box of delights will soon confirm that Hot Chip’s first adventure into the much vaunted world of DJ Kicks sounds good in every moment. As Ray Charles intones on the perfectly placed closing track Mess Around, ‘the band was jumping, the people too’. We couldn’t have put it better ourselves.