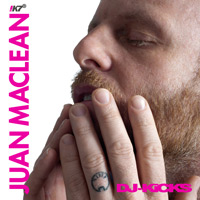 That Juan MacLean is just a bundle of contradictions. Here he’s created one of the year’s best mix CDs—and not just a proper party mix, which it certainly is, but even what you might call an “important” mix, a timely lesson in the enduring spirit of house music—and how does he choose to describe the process of putting it together? As an “existential tailspin.”

“I really wasn’t joking in the liner notes when I said that in the six months I knew I was going to do this mix, I spent most of the time agonizing over the relevance of doing a DJ mix in 2010,” says MacLean, a cheerful neurotic who’s clearly serious about his craft. “So much about DJ-ing has changed in the last 10 years. It seems that anyone at home can make their own mix, whether they’re a proper DJ or not. Which begs the question, why bother putting them out at this point?”

“So at the end of the day I just came back to where I had started, which was basically wanting to do something that was representative of where I’m coming from in producing my own music, and also focusing on the current house music scene.”

That track bookends MacLean’s DJ Kicks, which opens with the beatless strains of Ian Breno’s dub and closes out with Alex Frankel’s Rhodes-infused remix. Along the way, it arcs through 72 minutes of peak-hour energy, mixed live with two turntables, a couple of filters and a tape delay. The approach may be old-school, but the sound is simply classic, reflecting MacLean’s taste in timeless grooves and the raw, spontaneous, ecstatic energy of a dance floor in motion. The mix is also impeccably shaped, with a tracklist accounting for the natural ebb and flow of the crowd’s energy, and a couple clever codas easing us gently back down from the climax.

The oldest cut on the mix, Armando’s “Don’t Take It,” dates back to 1988, when it was recorded in one take in a legendary Chicago after-hours session. Detroit, normally remembered as the birthplace of techno, gets its due with a Theo Parrish remix of Rick Wilhite’s 1996 tune “Get On Up,” originally released on Moodymann’s KDJ label. Otherwise, the mix sticks largely to recent material, though you’d never know it from the sound of the tracks themselves. Without ever coming off as willfully retro, any of them sound like they could have been recorded at any point in the past 20 years.

One of the striking things about the setlist is its international scope, which flits through Glasgow (6th Borough Project), Berlin (Florian Meindl, Alex Niggemann), Buenos Aires (Manuel Sahagun) and even Adelaide, Australia (Sonny Foderra). Just consider Shit Robot’s “Simple Things (Todd Terje Remix)”: here’s a track made by a Dubliner now living in Stuttgart, remixed in Oslo and released on a New York label. It’s a great proof of just how universal a language house music has become.

And ultimately, MacLean’s DJ Kicks is all about achieving that universal vibe, unconcerned with populist trends or trainspotters’ disdain.

“As a DJ,” says MacLean, “I’ve been wrestling with the idea: how much are you an artist, with your own aesthetic principles, and how much are you an entertainer? I’ve always found it interesting to grapple with those two ideas, rather than throw yourself in either direction. It’s easy to be self-indulgent and stay cool and make the proper moves.  It’s also easy to just play hit after hit, which most people do. But to somehow wrestle with those two things and emerge with something that considers both, seems more interesting.”

Interesting it is. Fortunately for us, MacLean’s DJ Kicks doesn’t stop there. A love-letter to house music penned by one of the music’s most sincere (and well-schooled) admirers, it’s a sweet, sweaty, wide-ranging set that wraps you up in chugging grooves. At a time of proliferating podcasts and fly-by-night mixtapes, it’s a welcome change of pace: a mix that makes its case the old-fashioned way, one perfect blend at a time.