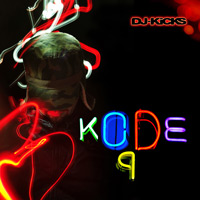 Kode9’s grasp on the throat of bass music in 2010 is almost unparalleled. His trend setting record label, Hyperdub, is in its sixth year of viral contagion; he’s become a published author on the theory of sound abuse and sonic frequencies being used as weaponry in his book ‘Sonic Warfare’ and his production work has mutated from an almost simplistic marriage of beats and sine waves into a fusion of dancefloor Ebonics and discordant synths.

Becoming a figurehead of UK dance music hasn’t been a quick process, and Kode9’s single-mindedness has contributed in some way to his notoriety, but it’s simply his tireless work as a record label boss and A&R that has marked him out as one of the most powerful ears within the scene. Probably best known to the wider global audience as the label that gave birth to two genre defining albums from Burial, Hyperdub has become one of the most reliably testing labels out there. Just as likely to release a glut of two and a half minute beat sketches from American beat maker Samiyam or Zomby as sprawling house opuses from Brixton bass bin temptress Cooly G, the label is at the forefront of innovation and it’s something that he has infused into his volume of the DJ-KiCKS series.

“Very simply, [the mix is] just a snapshot of my DJ sets at the first half of 2010,” he says calmly. “It’s definitely not an exploration of my musical heritage, but it’s not all new stuff. It probably signifies something about my relationship to dubstep that the mix only has a few dubstep tunes in it, and is instead a mix of UK funky, broken beat, dubstep, grime and some R&B. Unfortunately, I fear some listeners, because of my background, will think that all the tracks are just mutations of dubstep.”

Starting off in serene fashion with Nottingham producer Lone’s upbeat exploration of steel drum snatches on ‘Once In A While’, Kode9 dives into the percussive textures of Dutch producer Aardvarck before steering the mix into a duo of his own productions: ‘Blood Orange’ and the specifically tailored exclusive single, ‘You Don’t Wash (dub) (DJ-KiCKS)’. Jumping off from this point into a journey through current UK funky, Kode9 aligns tracks from Hyperdub artists Cooly G and Ikonika with works by Ill Blu, Sticky, Grievous Angel, Mr Majika, Ikonika and Scratcha DVA, sampling the textures and suitably brutal drum patterns that regularly inject London’s dancefloors with such a sustained level of energy.

“I find the whole mix pretty danceable in different ways. Some of the stuff is around 8 or 9 years old like the Aaardvark tune ‘Revo’ which Martyn introduced me to last year,” he notes; “And in the early 2000s, I was a big fan of Nubian Mindz as well so it was great to dig up that remix of his for the mix as I feel rhythmically things have swung back round to some of that broken techno stuff, with all its scattered snares, bent synths and maximalist percussion. Also that Maddslinky tune ‘Cargo’ is an oldie, but I’ve basically been playing it in practically every set over the last couple of years. The first time I heard that tune played at FWD>> at Plastic People I remember it was like someone had suddenly let the sunshine into this dark basement…”

The tracklisting is mostly, but not all London-centric, featuring a selection of big booming riffs and asymmetic percussion possessed by a guttural sense of forcefulness. “Cooly G’s ‘Phat Si’ really is one of those tracks for me; it’s just a timeless, mean, deadly roller and is effortlessly a Hyperdub classic. Producers like Lone and Zomby definitely have a magic touch and Mala, for me is like a tropical island in an ocean of dubstep sewage.”

On this mix Kode9 surfs through those artists and productions that sideswipe you in an unexpected moment of surrealist realisation. Whether it’s being brought by a track bringing the sunshine carnival vibe to a Shoreditch basement or by the sheer level of production and temperament that a producer pours into each of their tracks. Veering from the taught and poignant snare snap of Morgan Zarate’s ‘M.A.B.’ he flips from the troubled soul of Rozzi Daime’s falsetto on ‘Dirty Illusions’ to the bruised rhythm of JDaVeY and on into the advanced rhythm science of Terror Danjah and Headhunter’s breakout 808 anthem under his Addison Groove alias, ‘Footcrab,’ distilling some of the more powerful strains of modern UK dance music culminating in the  big moody tombstone of The Bug & Flo Dan’s ‘Run’.

“I love the sour R&B tracks of Rozzie Dame and Jay Davey in the middle. If only more pop music sounded like that…” he notes tangentially. “The first and second halves [of the mix] are pretty typical of my sets over the last year. The little ‘dream sequence’ in the middle, I only get to do when the vibe feels right and people look capable of moving to more downbeat stuff instead of just standing around and nodding their heads.”

“I started DJing around 19 years ago and I don’t know… I just think that every few years I get a musical epiphany from an intense experience in a club or in something I hear that fills me with energy, information and inspiration to produce and DJ. After each one I spend the next few years trying to decipher what happened in that singular moment.”

And sonically that’s what Kode9’s DJ-KiCKS does: attempt to decipher the tangled state of UK dance music in 2010.