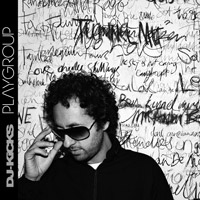 The stunning mix was produced by London´s Trevor Jackson, the mastermind
behind the highly acclaimed Playgroup project . In 2001, Playgroup released
its debut album that instantly was considered a classic. The idea behind the
album was simple: Take some disco and boogie beats, leave the odd ironic
twist behind and think more about making a spirit of eclecticism it´s central tenet. Mashing up funk, punk, hip hop and new wave into a funky
whole and adding guest appearances by reggae legend Shinehead, indie pioneer
Edwyn Collins or Le Tigre´s Kathleen Hanna , Trevor Jackson created a
colourful album full of positive and uplifting music that both had a pop
appeal and an underground feel.

Though his name has largely stayed in the backroom until recently, Trevor
Jackson has been around for quiet a while. In fact, he´s been involved in so
many projects, that he could be considered as one of UKs leading
grandmasters of cool. He began his musical career in the late 80s by
designing record sleeves. Trevor Jackson designed  for Champion records and
4th & Broadway for such artists like Eric B. & Rakim and the Jungle
Brothers, he designed the trademark covers for the Stereo MCs, Raze and Todd
Tery. In the meantime, he already played music with his C-64 home computer
and a 4 track tape machine. In the early 90s Trevor Jackson was the brain
child of hip hop act The Brotherhood, which led him into creating more music
and to start a label called Bite It!. Attention from major labels began,
commissioning him to remix their most imporant acts. Calling himself The
Underdog, his remixes were highly anticipated and well respected . Via his
remix work, the Brotherhood eventually signed to Virgin in 1996. The
Brotherhoods first album “Elementalz” was cited by many as “The greatest UK
rap album ever” but eventually the band split and Jackson embarked on
producing The Emperor´s New Clothes for Acid Jazz . To his disappointment,
the label decided not to release the album so Jackson took a time out to
decide what to do next.

In 1996, Trevor Jackson started a brand new label called Output. The label
has released over 40 releases to date. Fridge and Four Tet began on Output
as well as Paris´s Black Strobe and Atom Heart´s LB project. As The Underdog
Jackson remixed U2, UNKLE with Ian Brown and Thom Yorke, Run DMC and Massive
Attack amongst many others. With Bristol´s original wild bunch, Trevor
Jackson traveled Europe on the 1998 tour. DJing since the mid 80´s, Trevor
was a regular at the legendary Mo´Wax Blue Note sessions “Dusted” and since
the release of his Playgroup album has started playing on the global club
circuit.

Naturally, for !K7 it was the perfect time to ask the man for a “DJ
Kicks” mix. For it, Trevor Jackson came up with a selection that reflects
many of his musical influences from the past years. You´ll find all time
heroes like the Human League or KC Flightt as well as current hotsters like
Smith n´ Hack or Metro Area. There´s New Yorks no-wave revivalists The
Rapture close to original punk funksters The Flying Lizards, Manchesters Jay
Walk and the great I:Cube Mix of Ana Rago. Trevor Jackson blends music from
more than two decades of club and dance culture into a superbly funked up
mix. No doubt, the “DJ-Kicks: Playgroup” will boost Mr. Jackson into orbit.