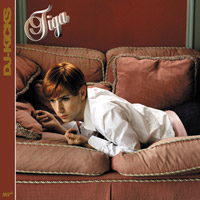 Hey Tiga, please….. smile over here!
The clicking of dozens of cameras fills the room making the person behind the flashes look momentarily even more fragile. He arrived on the scene suddenly; nobody knew who he was or had heard anything about him. His name is Tiga, just Tiga. Some might still remember the name Tiga & Zyntherius in relation to the smash-hit called “Sunglasses At Night”…

What do we know about this 29-year old guy who lives in the city of Montreal along with one million other Canadians? Why is he following in the footsteps of artists like Carl Craig and Playgroup, who since 1995 have proven their DJing skills in the electronic universe of the DJ-Kicks series?

The first answer has a family connection and goes way back to the time of Tiga´s childhood. “When my father was working as a DJ, he had to use cassette decks and his job more or less comprised perfecting the transition from one track to the next. But I learned from him the importance of the structure of a set and how such planning can be the difference between heaven and hell for you and the audience!“
In saying that, Tiga isn’t the kind of person who constantly gripes about his daily problems – he just solves them using his own solutions and personal initiative. When he couldn’t find a decent source of vinyl in his home town, he opened his own record shop, DNA Records, organized his own parties and, since the early nineties he’s been manning the turntables at least twice a week – sometimes in front of a selected audience during the Paris Fashion Week and sometimes in a dirty cellar somewhere in eastern Berlin. At the end of 1999, he founded his own label, Turbo Recordings, from the proceeds of the sale of his club. Apart from a few 12“ releases, Turbo Recordings has mainly released CDs and artist albums, because that’s where Tiga sees the singular future for modern electronic musicians. Alongside his responsibilities as label manager and producer, Tiga is still a DJ with his own particular ideas about the job. “Sometimes, I almost feel guilty about how much time I devote to searching out good records. I personally take the job of DJ very seriously, but I unfortunately don’t often get that impression from some other DJs, who just spin a few records at random. DJing is really a full time job and I’ve been doing it constantly now for more than eleven years. Even if I had a month off, I would use it to have a good listen to my entire record collection!“

In contrast to earlier mix CDs, Tiga has included all kinds of styles in this DJ-Kicks set and has nevertheless managed to retain a nightclub dance context. A track from 2Raumwohnung thus leads into a track from Traffic Signs and the disco anthem, “So…“, from the legendary group Soft Cell meets minimalist techno of Antonelli Electric and Tiga & Zyntherius’ “Dying in Beauty” is woven into Codec & Flexor´s “Time Has Changed”. A little later, the Märtini Brös straight out of Berlin follow on from Charles Manier (USA). The CD ends with a version of Felix da Housecat´s “Madame Hollywood”, remixed by Tiga himself and, of course, featuring his own vocal talents.

Tiga more or less followed his instincts when preparing for the DJ-Kicks set, but he does admit to having some basic rules. “As a result of my experience, I rarely specially prepare my set or practice anything. But I always know what the first record will be, as this record often determines what follows for the rest of the evening and can work like a kind of calling card. And I always think about my last record or the one I should play at the peak of my set. My record collection is sorted according to the energy level of each record – the chilled-out tunes at the front and the big bombs at the back!“

The cover version of Corey Hart´s “Sunglasses At Night”, which was produced by Tiga and Jori Hulkkonen from Finland, has become one of the biggest crowd-pleasers of them all. The single entered several top-ten charts around the world and reactivated the discussion about the revival of the eighties sound. Tiga himself has no problem with success or the hype that surrounds him. “I’ve always built in records from the eighties into my DJ sets and some of them have also had a great influence on the way I produce tracks. Every artist finds inspiration in the past, from which he draws strength in the present. In this sense, I have remained true to myself. It only becomes a trap if you, as an artist, stop looking to the future. That can happen to any musician during his career, but if you just keep letting the past repeat itself like a loop, then you really have a problem!“

This is how DJs like Tiga in particular, as a result of their diverse range of skills, have come to play on the whole spectrum of music scene. Experience from past mix CDs, like “Mixed Emotions” (2000) and “American Gigolo” (2001), and a succession of label compilations, like the Turbo Studio Sessions, has found its way onto his mix for the DJ-Kicks series, as well as the exclusive track, “Man Hrdina“, which will appear beforehand as an EP of its own.
“Come what may, I wanted to make sure that the sound quality for DJ-Kicks was more than just good, because I was working with some digital and some analog sources. That’s why I spent my entire advance on new equipment and tried out several different mixing desks to get the best possible result. The finished set was therefore recorded using three turntables and with the aid of a loop player.“

But we still haven’t answered the question, what impression do we have of this guy called Tiga? He would define himself as a techno musician, who wants to conduct experiments with new forms of pop music. He’s someone who sees self-confidence, character and his love for electronic music as one. He is an out and out DJ.
“My personal definition of a DJ is someone who plays the music he loves and thinks other people should hear it!“